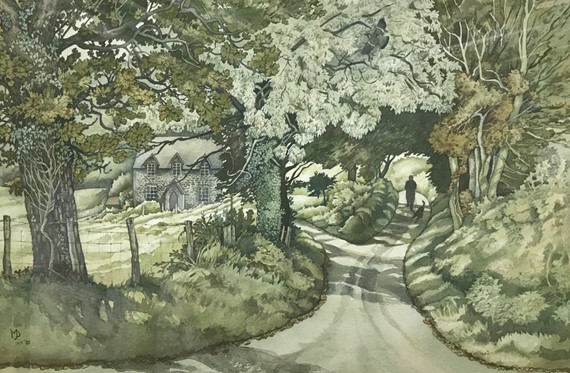 The exhibition Margaret Jones: Celebrating 100, highlighting the career of award winning illustrator Margaret Jones on the eve of her 100th birthday, includes early sketches and unseen drawings owned by the Jones family themselves. The exclusive exhibition opens the door to this famous painter’s art, inviting visitors to discover the ideas, sketches and inner workings of her iconic paintings and illustrations.

The exhibition will feature previously unseen original prints from the ‘Arthur’ series and rare prints from unpublished work including ‘Seven days of the week’, which looks at how the names of the days of the week derive from the sagas of the Nordic Kings and Queens. Archive photo albums and unpublished books will be shown alongside the drawings and prints giving an intimate view of the artist and her life.

Ceredigion Museum’s assistant curator Alice Briggs said, “It has been wonderful to have the chance to delve through the portfolios of Margaret Jones, to discover more about her process of creating her illustrations and to learn more of her own detailed knowledge of the storytelling traditions in which she has illustrated.”

Becoming a professional painter at the age of 60, Margaret became known as one of the leading illustrators in the Celtic tradition and other folklore. Born in England, Margaret brought up her own young family in India with her husband, before is appointment as lecturer in Education Studies at the University College of Wales, Aberystwyth.  Here, her portrayal of the Mabinogi has defined the way a generation of children in Wales imagine the folklore of the nation’s past.

Professor Sioned Davies, the former Head of Welsh at Cardiff University, whose ongoing contribution to Welsh language and culture is highly influential, will open the exhibition on Saturday 27 October at 2pm. All museum visitors are very welcome to attend the official opening.