It Happened in Aber 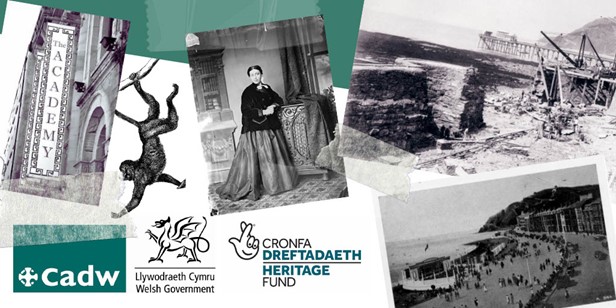 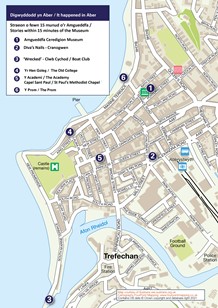 Amgueddfa Ceredigion Mus · 1 Welcome To It Happened In Aber

This building was once the home of Aberystwyth Navigational School where Sarah Jane Rees taught. She was the first woman to win the chair at the National Eisteddfod in 1865 under her bardic name of Cranogwen. She was voted one of the top five ‘hidden heroines’ in the Women’s Equality Network list of 100 Welsh Women chosen to celebrate women’s contribution to Welsh national life in 2018. Mair Jones describes Sarah’s amazing life while Jane Hoy talks about her winning the National Eisteddfod in 1865. Lynne Blanchfield reads extracts from Cranogwen’s poems and reflects on her poems.

Rosie and Sarah, founders of monthly nightclub ‘Wrecked’ held in the Boat Club on south beach, chat about their experiences of providing a lesbian friendly space. The poem and song Lesberados is based on stories shared by some of the regulars at Wrecked who took part in an oral history workshop.

This splendid building on the seafront was originally built as a hotel but became part of the University in 1872. Meet Dorothy Bonarjee, the Hindu bard who won the University Eisteddfod in 1914 and Goronwy Rees, Principal from 1953 – 1957. Lynne Blanchfield was a student at Aberystwth and returned to live here after she retired, studying Welsh in The Old College. Lynne won the Chair for Poetry at the Learners’ Eisteddfod in 2020 with her poem Y Gors/The Marsh.

Methodists rejoiced when a chapel was built on the site of the Three Jolly Sailors pub, and the Aberystwyth Observer remarked: “It is not often the devil makes way for God.” The chapel closed in 1992 and opened as The Academy pub in 1999. Many of the original features were retained with the Ten Commandments and a psalm still displayed on the walls. Local historian John Weston tells the story of the chapel while Ceredig Davies recalls attending the funeral of his Uncle Jack who was caretaker of the chapel. Gareth Revell shares his stories as General Manager of the Academy for almost 21 years.

No visit to Aberystwyth is complete without a walk along the Prom! Local historian John Weston relates some of the experiences of the early tourists who appreciated the health benefits of being beside the sea as much as we do today. The Prom is the perfect stage for events. Jane Hoy takes us back to 1896 to meet Percy Meye, the skirt dancer who performed for the Prince and Princess of Wales. Jo Engelkamp remembers some of the Peace demonstrations during the 1980s while several women who went to Aberystwyth’s first Gay Pride on the Prom in 2012 enjoy reminiscing about the event. Naveed Arshad shares his memories of breaking the Guinness World Record for the Longest Human Archway Relay on St David’s Day, 2020

Lynne Blanchfield: for reading extracts from Cranogwen’s poems and her tutors Felicity Roberts and Ioan Guile.

Rosie and Sara, the women of Wrecked and everyone who came to the Pride on the Prom workshop

Gareth Revell: memories of The Academy